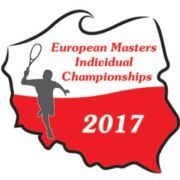 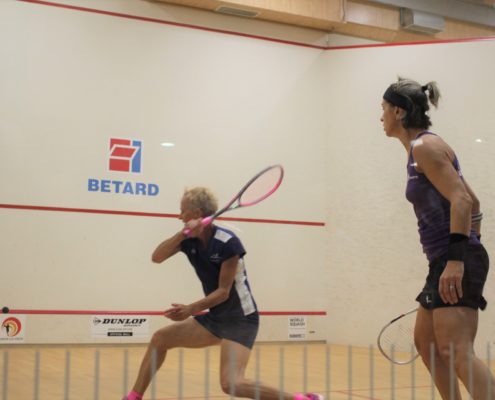 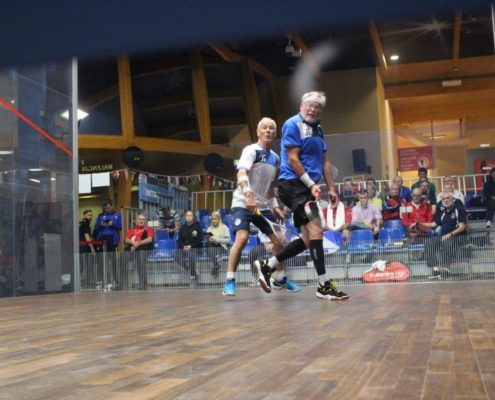 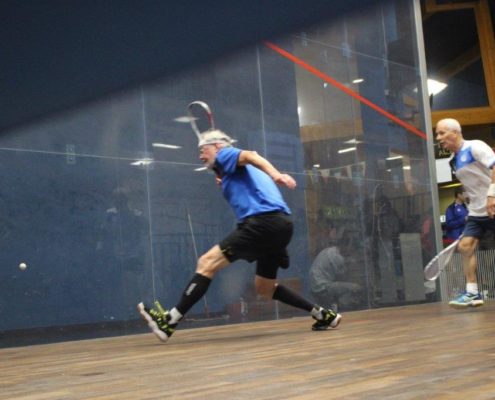 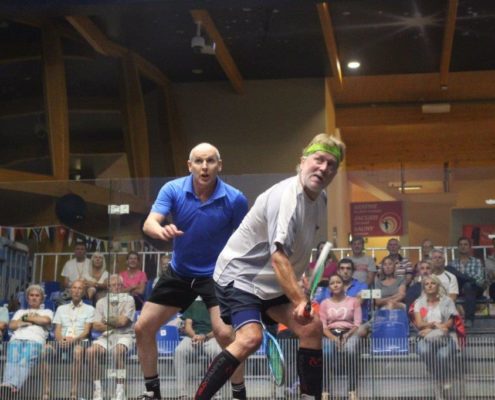 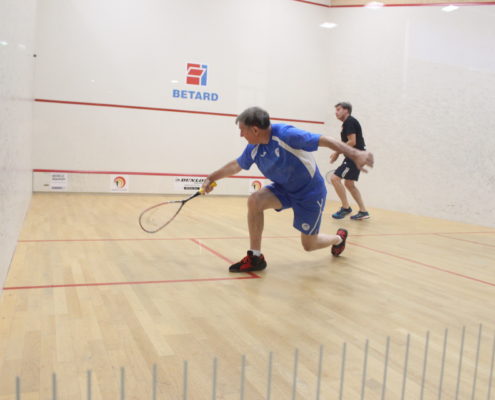 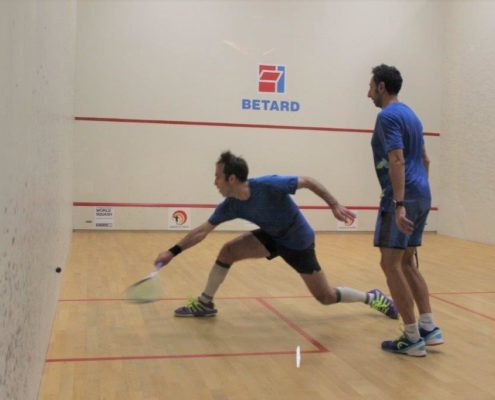 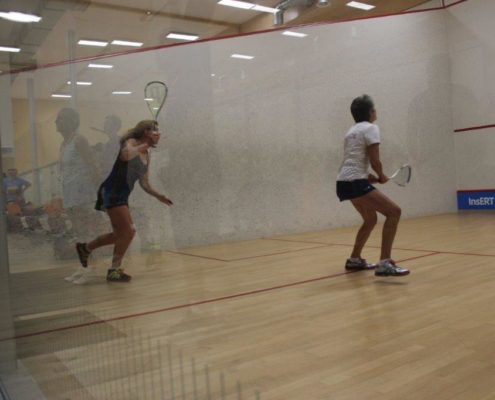 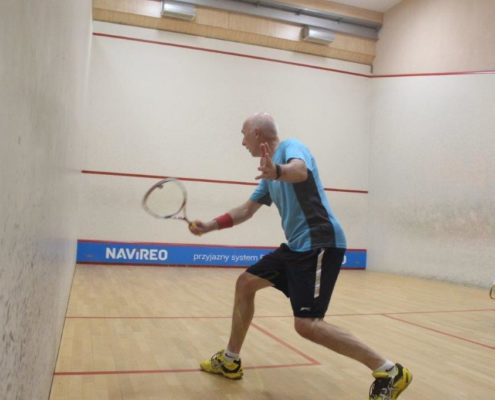 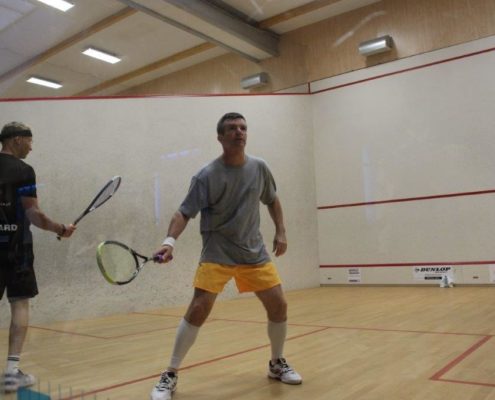 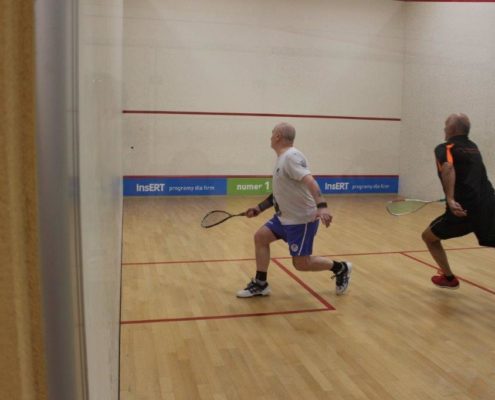 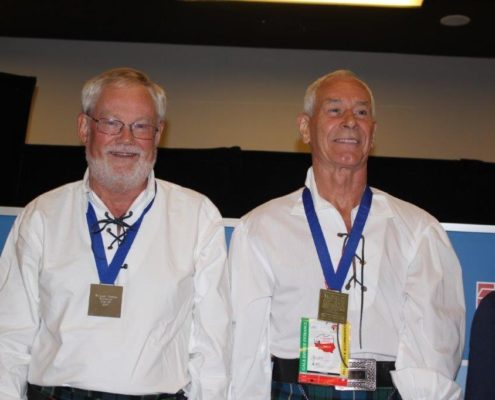 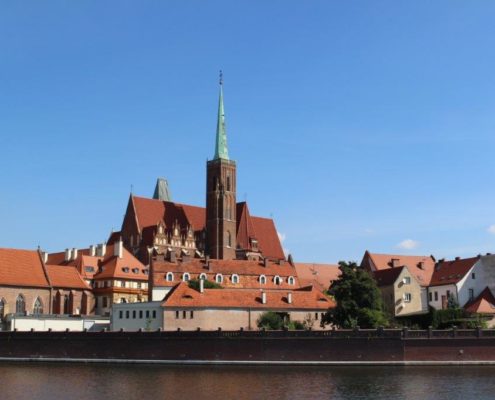 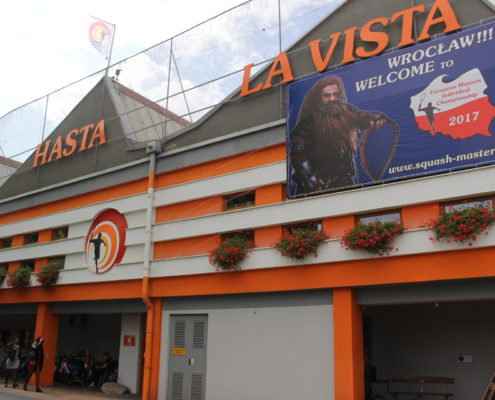 The European Masters Individual Championships 2017 were held at the Hasta La Vista Squash Club in Wroclaw, Poland on 30 August – 2 September 2017.

Hasta la Vista is a club with passion, featuring 32 squash courts and extensive sports and leisure facilities which together create perfect conditions for SQUASH! Located in the magical city of Wroclaw the centre is a unique place both for competitions and touristic visits.

Eleven players from Scotland entered the competition – all players played well and provided encouragement and strong support for all Scottish players. The results of the Scottish players are listed below.

The O55 Ladies was played as a round robin with two leagues of 5. Fiona won all her round robin matches 3-0 against two English players, a French player and a German player.

In the final Fiona played the 1st seed, Mandy Akin from England who also won all her round robin matches. Fiona started well and moved Mandy around the court with good length hitting and clever back hand boasts and won the first set 11-7. Mandy played some good winning drives and won a closely contested second game 11-9. Mandy started well in the third game but Fiona fought back to win the game 11-8 take a 2-1 lead. In the fourth game Mandy took an early lead with some good winning drops and although Fiona fought back, Mandy held on and levelled the match at 2 games all. The final game was fiercely contested by both players but to the delight of the Scottish supporters in the large gallery, Fiona’s superior fitness proved key and she won the fifth game 11-8 and the O55 Championship.

The O55 Ladies was played as a round robin with two leagues of 4. Maureen won one of the round robin matches to a German player but lost to both of the English players. She therefore finished third in the group and qualified for the 5 – 8 position.

Maureen played well in the play offs and won both matches 3-0 against a German player and then a French player to finish in 5th place in the O60 Championship.

Malcolm played well and won both of his matches 3-0 against Czech and Finish players to reach his seeded position and the last 16. Malcolm then met Englishman, Jonathan Gliddon for a place in the quarter final. Malcolm was well beaten 3-0 Malcolm played one match in the Monrad which he lost to a Swiss player before having to withdraw from the other matches due to a recurring tennis elbow injury and therefore finished in 16th place in the O45 Championship.

Having recently recovered from a leg injury Alan won 4 matches 3-0 against Swedish, German and two Irish players to reach the semi final. Alan then met a strong German player, Amin Schmetz and lost a close match 3-1. Alan then played Ian Bradburn in the 3-4 place play off but had to retire due to injury. Alan finished in 4th place in the O55 Championship.

Gordon played well and won both of his matches 3-0 against Czech and German players to reach his seeded position and the last 16. Gordon then met Englishman, Mark Taylor for a place in the quarter final. Gordon was well beaten 3-0. Gordon played three matches in the Monrad – he lost two matches but won against a Finnish player and was in 15th place in the O55 Championship.

Paul played well and won his first match 3-0 against a Welsh player. He then won an excellent match 3-2 against Englishman, Dave Clarke. Paul then lost 3-1 in a tight match against 3/4 seed Derek Lawrence. In the 5-8 position playoffs, Paul won both matches 3-1 against German and English players and finished in 5th place in the O60 Championship.

John played well in the early rounds and had three 3-0 wins against English, Welsh and Finnish players to reach the semi final.

In the semi final John met 1st seed Nicholas Drysdale from England who is a former European and British Open Champion. This match was played on one of the two all glass courts.

John started well and moved Nicholas around the court with good lobs and drop shots and won the first game 11-4. In the second game Nicholas upped the pace and won the second game 11-4. In the third game John took an early lead, but Nicholas fought back before John took the initiative and won the game 11-7 to lead 2-1. The fourth game was tight throughout and Nicholas had a game ball at 10-9 but John levelled at 10 all, before Nicholas won the next two points and won the game 12-10 and level the match at 2-2. In the deciding game Nicholas was ahead in the early stages and when Nicholas led 9-6 he looked the likely winner. However at this stage John upped his fighting spirit and levelled the game at 10 all – John then won the next two points to win the game 12-10 and reach the final. This match was watched by a large knowledgeable crowd who were entertained by a very competitive match.

The O65 final was an all Scottish final between team mates John Rae and Jim Dougal! The first game was competitive with John hitting the ball hard and wide and Jim trying to play winning shots at every opportunity. Either player could have won the first game but John took the game 11-9. John’s superior fitness was key in the second and third games which John won 11-6, 11-6 and won the match and the O65 Championship.

Jim had a bye in the first round and then won a tough match 3-1 against a German player. In the quarter final Jim played Geoff Walton, a seasoned England Masters international who had moved into the O65 age group.

The first two competitive games were shared with Jim winning the first 12-10 and Geoff winning the second 9-11. Geoff was fitter and faster around the court but Jim’s touch and racquet skills ensured that he played numerous winning drop shots and boasts. Jim won the next two games 11-6, 11-9 and progressed to the semi final.

Jim played Peter Karlsson of Sweden in the semi final – Peter is a regular winner on the European Masters circuit. The game was played on one of the two all glass courts. Jim won the match 3-0 – again his all round racquet skills were too good for the hard hitting Swede and Jim progressed to the final.

The O65 final was an all Scottish final between team mates John Rae and Jim Dougal! The first game was competitive with John hitting the ball hard and wide and Jim trying to play winning shots at every opportunity. Either player could have won the first game but John took the game 11-9. John’s superior fitness was key in the second and third games which John won 11-6, 11-6 and won the match. Jim was the runner up and in 2nd place in the O65 Championship.

Dave was not seeded and was unlucky to meet 3/4 seed Peter Karlsson in the first round – Dave lost a tight match 3-0. In the Monrad, Dave won all four matches against Irish, Finnish and two English players and finished in 17th place in the O65 Championship.

Phil successfully submitted a late entry for the tournament. He lost 3-0 to 5-8 seed Erik Kooijman in the first round. In the Monrad, Phil won two matches and lost two matches and finished in 22nd place in the O65 Championship.

Ian comfortably won his first two matches 3-0 against German and Finnish players to reach the semi final. In the semi final Ian played Barry Featherstone, the O65 European Champion in 2015 and former O65 British Open Champion. Barry has had a number of injuries over the last year but is back playing on the Masters circuit..

Ian started well and moved Barry around the court with deep drives and accurate drop shots – he comfortably won the first two games. The third game was closely contested but Ian closed the match out in the third to qualify for the final.

In the final Ian played Rodney Boswell, the 2017 British Open Champion. This was a very closely contested match – Rodney played some excellent winning boasts and backhand drive winners. Ian was fitter and faster around the court. Ian won a tight first game 11-9 and came from behind to win the second game 12-10. Ian had two Championship points in the third game but Rodney fought back to win the game. In the third game Ian led 3-0, but Rodney then led 6-3. Ian fought back and at 9-9 won the last two points and won the game 11-9 and the O70 Championship.

All 11 Scottish players and supporters (WAGs including roving photographer Margaret Sturman) enjoyed the experience of the 2017 European Masters Championship. The Hasta La Vista club, with all the courts and facilities was excellent. The tournament hotels, catering and transport arrangements were first class. The civic dinner and prize giving was a wonderful event and we all caught up with old and made new European friends.

Wroclaw is a beautiful city and we all enjoyed the mixture of competitive squash and cultural activities in the 2016 European City of Culture.