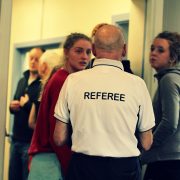 Colinton Castle Squash Club hosted 68 players for the East Senior & Junior B event on the weekend of 27th/28th August. Some excellent squash was played with many close matches across the 9 divisions. With the new Scottish Squash directive that senior players are required to play regional events if they wish to be considered for selection to the National team, a number of seniors joined the Juniors to hone their games and put themselves in the shop-front for selection. I won’t put yours truly in that bracket, but certainly enjoyed my experience battling against some of the best Juniors in the country. Prize to the best shot of the weekend (that I witnessed anyway) goes to Robbie Harper for a flat-lined rolling nick that I couldn’t even see, let alone hit.

To the main events. The finals were all hotly contested. Division 9 was won by Andrew Widelko who beat Cathryn Hegarty 3-1, then Jamie Cargill overcame Ruaridh McInnes 3-0 in Division 8. Division 7 was taken by Andrew Chrumka over Kyle Penman, reversing their result from Bridge of Allan last week. Hamish Buchanan, (un)officially the fastest player on show, got past Sandy Niven 3-1 in Division 6, then Brodie Young won a close 3-2 against Jack Fenton in Division 5. David Taylor got the better of Euan Reed in Division 4, then John Meehan beat a tiring Sean Robinson 3-1 in Division 3 (note to Sean: please finish off your semi-final opponent in three next time rather than taking it to 5). Division 2 saw arguably the best match of the weekend with James Singh just overcoming Fraser McCann 3-2 in an excellent hard-hitting duel on Court 2. Then to our final of a very high quality Division 1: Jamie Henderson vs Stuart George in front of an appreciative crowd. The match was played in an excellent spirit with Jamie winning two tight games 13-11, 11-9 from one game all to become the East B 2016 champion.

Stuart & Jamie looked suitably bemused by their prize of a mug filled with squash goodies. In case the players were wondering, there were three such limited edition mugs available: the body version for the plate winner (strength needed to win both their Sunday games), the cardiology version for the runner-up (strong heart needed to reach a final), and brain version for the winner (strong mind needed to take the main prize). I expect these to become much sought after (maybe not), so they may return for the East Juniors in March.

Many thanks to the team from Colinton Castle for providing us with courts, facilities and food & drink over the weekend. Also to the markers, Eric Donohoe, Christy Looby, Richard McIntosh, Adam Hill, and others, who gave up their time to help and finally to the team of admin helpers: Gordon Chrumka and Fiona Taylor, as well as the number of Juniors who took on score-entering duties.