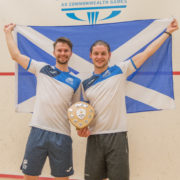 Doug Kempsell and Kevin Moran pulled off a shock win over world champions Alan Clyne and Greg Lobban to secure the Scottish Men’s Doubles Championship title at Scotstoun in Glasgow this afternoon (Sunday).

While nobody doubted the quality of Kempsell and Moran, few had expected them to emerge victorious against the top seeds who so memorably won the World Doubles Championship in Australia last August.

Having received a bye into the second round, Kempsell and Moran saw off Tino Mackay Palacios and Chris Murphy 2-0 (11-2, 11-2).

They then successfully hurdled the challenge of Chris Leiper and Jamie Henderson, emerging as 2-0 (11-9, 11-3) winners to reach the final.

There they produced a superb display to upset the odds and secure the national title.

Moran said: “We came into the event off the back of a win over England duo Declan James and Tom Richards in Manchester last week which gave us a lot of confidence.

“They are both top 40 players but to then beat the world champions was totally unexpected.”

He continued: “We set out with very specific tactics because we know there game so well.

“We had to be meticulous in our tactics and back ourselves in the big points which we did.

“To win without dropping a game is unbelievable.”

Kempsell believes the underdogs tag played a part in the win.

He said: “I think the way we played showed that we didn’t have any pressure on us. We went out there relaxed to do our best.

“We worked well together, we have been in positions before where we have had a chance to finish things off but haven’t. Today we were able to do that.

“I was just saying to Kevin, if we can do that here, why can’t we go down to Manchester and take a few scalps at the World Doubles Championships next month?’

Ali Thomson and Katriona Allen emerged as winners in the women’s event following a professional 2-0 (11-4, 11-5) win over Lucy Murchie and Maddie Orr in the final. 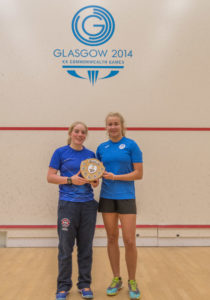 Allen was delighted to come away with the victory.

She said: “It was really good; it’s a new partnership so we’re still learning.

“We worked hard so it was great to get the win and the confidence for the future as well. I felt that we really gelled.”

Thomson and Kempsell also won the mixed doubles which was played in a round-robin format. 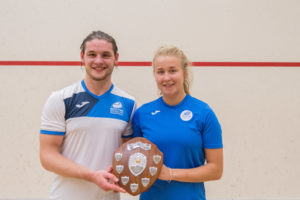 Thomson said: “We’re obviously very pleased. I had played with Doug in Manchester before and we have trained together so we knew each other’s game.

“It is all about having a game plan and we tried to build pressure on our opponents as much as possible.”