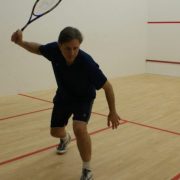 Recently, Jason Broadberry, Coach at David Lloyd West End (Glasgow), took up Scottish Squash’s offer to work alongside the Performance Team and take part in some continued professional development (CPD). Having enjoyed the process and benefited from his time working with the Scottish Squash coaches, Jason got back in touch to speak of his experience.

Last weekend I popped over to Herriot Watt Uni to take the advantage of the opportunity, advertised by Scottish Squash, to “Work With Performance Players”.

National Coach, Paul Bell, told me to bring some ideas about his topic of the day – ‘movement’ – as we’d be discussing and implementing some of those ideas. I didn’t expect to be quite as hands on as I was, but was delighted to be involved with Paul and the Scottish Squash coaches. In the morning we met junior players and the coaching team and I followed a group of players around 4 different disciplines, that were taken by the Regional Performance Network Head Coaches (Kevin Moran, Dave Ireson & Martin Woods and the strength & conditioning coach).

Was it Jonah Barrington who said “If I don’t move well, I don’t play well!” – well he’d have been delighted to see that ‘movement’ was the theme of the day. After being taken through a new dynamic warm up, the players then covered the 4 very different sessions to enable them to develop better movement, flexibility; as well as thoughts on how the practised movement could help their game. I followed a group of players round the different disciplines and tried to add my thoughts on how to get the most from what they were being shown. It was great to see the enthusiasm of the coaches and pick up some different coaching techniques (as well as learn a lot about flexibility).

So back to the courts and we were given a group to take through the afternoon and ‘give as much input as possible’. The group I took were very focused individuals and I particularly liked the way that they all challenged the idea behind the session, what they were supposed to get out of it and the problems they were having. It kept me on my toes and I like to think I gave some good input to the players – I was impressed by their work ethic and how they took the ideas on board in their different ways.

The final session was ‘Ghosting With The Pros’ – The senior players joined the group and we all had one Senior Pro per court taking us through a ‘duel ghosting’ session. It was a long and physically tough session and I was glad that I was just in charge of the stopwatch – not to mention yelling at the players to maintain the movement they had been learning all day.

A warm down and discussion with the players completed a very enjoyable day, I personally had plenty to take away to develop in my own coaching programmes.

I’d recommend this to any coach wanting to get involved and what I particularly like about the new regime at Scottish Squash is the inclusiveness of the set up. This, linked with the undoubted experience of the coaches, can only help propel every individual juniors to achieve whatever they want to – after all it’s up to them to learn the lessons, put in the work and get the rewards.

If you’re interested in taking part in future events, take a look at the upcoming schedule and register your interest.