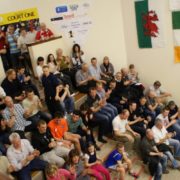 Details of which events have been placed in each of the clubs can be seen below:

In order to work in partnership with Scottish Student Sport (SSS) to deliver the SSS Squash Championships (Friday 1st – Sunday 3rd February 2019), Scottish Squash have made the decision to run the Scottish Under 23 National Championships as a stand alone event in season 2018/19. This event will take place at Scottish Squash Rackets Club and a date will be confirmed in due course.

Scottish Squash are now accepting bids from clubs who are interested to host Gold sanctioned competitions next season. Full information can be found here.