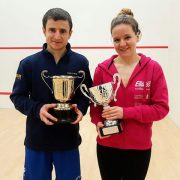 The men’s final was between the two ¾ seeds, the Scottish and Welsh number ones, in their first singles meeting. Wales’ Joel Makin looked in ominous control in the first game, taking it 11/6 with Alan Clyne still to find his game. But the Scotsman was more himself from the outset of the second, and was always ahead on the scoreboard for the next three games. It was never easy, there were plenty of punishing rallies, but with a packed crowd noisily willing him on, there was a sense of inevitability about the destination of the trophy. Clyne took the lead 11/8, 11/7 and stormed into a 10-3 lead in the fourth. Makin saved four match balls, but soon enough the trophy was back in Clyne’s hands.

“I got a scare in the first, but managed to get back on track. Joel played well and I’m sure we’ll have a few tough battles in the future. It’s great to win here again, it’s a tournament that we always want to come to, and it showcases Scottish Squash well. You can see from the results here that things are progressing nicely, long may it continue.” Alan Clyne, 2017 Edinburgh Open Champion

Full match reports and pictures from the event can be found on the official website: www.edinburghopensquash.com