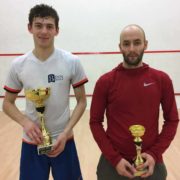 It was fourth time lucky for Rory Stewart who finally got the better of top seed Jaymie Haycocks at the weekend’s BSPA Boston Open in Lincolnshire to land his maiden senior squash title.

Stewart, currently world ranked 186, lost to the experienced Englishman as a raw 18-year-old and again a year later.

Haycocks, who was ranked 74 in the world last month, got the better of him for a third time in April this year, winning in five tight games before Stewart emphatically turned the tables on Sunday with an impressive 11/6, 11/5, 13/11 win in 40 minutes.

The 21-year-old’s victory follows last year’s success at the Boston Open for Kevin Moran who became the first Scot to win the men’s event. 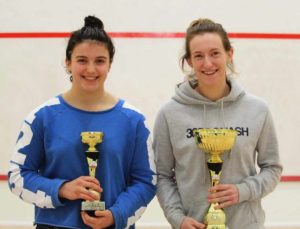 Stewart who heads south with Stuart George this week to play in the PSA Grimsby Cleethorpes Open, said: “I am really pleased to get the win, especially having lost to Jaymie a few times before.

“Georgia Adderley was in the women’s final so I got to the courts early and had a hit before my final. I felt pretty good and comfortable with my game and when the match started, everything was working for me.

“I managed to keep my concentration throughout most of the match which was something I hadn’t done in my semi-final.

“I went 8-2 down in the third and dug deep to claw my way back and get it done in three games, so to beat Jaymie 3-0 was really good.

“I have learned every time I’ve played him in terms of what works and what doesn’t work.

“I needed to control the middle of the court and I did that really well and it showed in the result.” 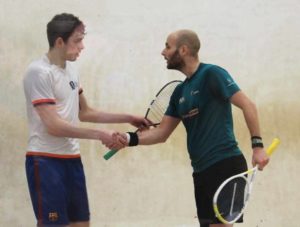 The British Open U-23 champion continued: “I have been working quite hard on strengthening my back the last couple of months after having some issues and it’s held up well the past few weeks.

“My semi-final went five games over an hour against Tom Walsh who won the British U19 title and is essentially the best junior squash player in Britain.

“It was quite physical but thankfully I felt fine the next day before the final.”

Unseeded Stewart takes on second seeded Frenchman Victor Crouin in Grimsby on Friday and is confident he can go deep again if he can get past his first round opponent. 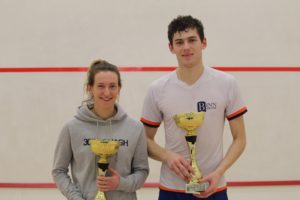 He added: “I am looking forward to the tournament because it will mark a year since my first PSA event.

“There’s about 10 players that probably have a good chance of winning and I would like to think I am one of that 10.

“I have a tough first round match against Victor Crouin but if I can get through that, I can hopefully do well again.”