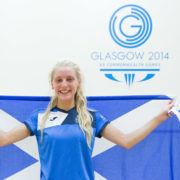 Carrie Hallam says she is relishing the prospect of donning Scotland colours again next week after being selected to compete at the WSF World Doubles Squash Championships in Manchester.

The 19-year-old will team up with Scotland’s number one female singles player Lisa Aitken in the women’s event and Chris Leiper in the mixed doubles.

Earlier this season Hallam reduced her training schedule to focus on her degree at Edinburgh University where she is studying Neuroscience.

But the former Mary Erskine pupil has been back training hard on the doubles courts in recent weeks and has been rewarded with a place in the Scotland squad which will compete at the National Squash Centre in Manchester between August 1st and 5th.

She said: “I’m really looking forward to heading down to Manchester.

“I have always enjoyed playing doubles and it’s great being back on court.

“I love the team aspect that you don’t get with singles and the attacking nature of doubles. 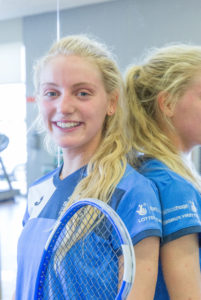 “It’s so fast paced and the pressure of having someone else on court you don’t want to let down just adds to the heat of the moment feeling.

“I competed at the 2015 Commonwealth Youth Games for Scotland and at senior level when we won promotion at the European Team Championships last year. It will be a great experience to do it again and I can’t wait for Manchester.”

“It will be tough but I couldn’t ask for a better partner,” Hallam added.

“I love playing with Lisa.

“It’s great having someone with so much experience on court with you and when you play with Lisa you don’t want to let her down. 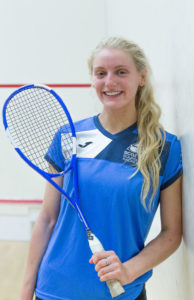 “She is so good at communicating, just knowing when to speak to you in between rallies and she reads me and opponents really well.

“There’s a lot of promising players coming through in Scotland like Orla Young and Georgia Adderley which makes it an exciting time to be involved in squash. Having someone like Lisa to look up to can help us all get better.”

In the men’s event Alan Clyne and Greg Lobban will be defending their world crown whilst Kevin Moran and Doug Kempsell will look to make inroads after landing the Scottish Men’s Doubles title earlier this month.

Kempsell will also team up with Lisa Aitken in the mixed event.

The full Pool line-ups, including seedings, are as follows:

Forward thinking – world title holders Clyne and Lobban eye Commonwealth...
Scroll to top
This website uses cookies to improve your experience. We'll assume you're ok with this, but you can opt-out if you wish.Accept Reject Read More
Privacy & Cookies Policy
Necessary Always Enabled