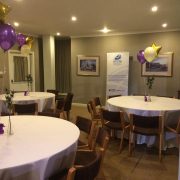 Following an extremely well received Celebration and Awards Evening on Friday 4th November. SSRL would like to say thank you to all of you who were able to attend and also to all of you for promoting the event throughout Scotland.

The event was held at the Edinburgh Sports Club. JJ did a great job of making everyone feel very welcome. Thank you to Ewen Cameron for awarding the prizes and to Lisa for underpinning the organisation of such a successful event. The Pentland Ceilidh Band ensured everyone danced until midnight – which was quite a workout!

We have a strong men’s team including two outstanding players and role models in Alan Clyne and Greg Lobban. Alan led the team in the European Team Championships winning our first senior medals for 17 years beating Germany in the semi finals to win the Bronze medal. All of the matches were tough and hard fought. However, it was Greg’s win against France and his comeback against Germany in these Championships that led to Greg Lobban receiving several nominations and being awarded male player of the year for 2016.

Georgia’s progression in 2015 / 2016 has been outstanding. Having competing ferociously in not one but 3 European representative events (U17,U19 and Senior Women) Georgia received several nominations and has been awarded female player of the year for 2016.

Alasdair fought off stiff competition as also nominated were the talented junior players – Georgia Adderley and Richard Hollins. However, Alasdair has had a tremendous season at Under 15 level in Scotland and in Europe winning 4 titles (Irish, Swiss, Welsh and Scottish). He finished Runner up at the British Nationals and German Open and retained the national title for the 6th time in a row. Alasdair also finished the season as number 1 ranked under 15 in Scotland and Europe and for these reasons he received several nominations and was awarded Junior Player of the Year 2016.

For winning the British Masters Champions and leading the men’s O65s team to win the Home International Jim was awarded Masters Player of the Year.

Fiona McLean was highly commended for her own achievement in winning the Women’s British Masters Championships.

Coach of the Year: Kevin Moran

This was a closely fought category with nominations received for Malcolm McKay, Simon Boughton, Paul Jenkins, Jane Martin, Ian Clarke, Peter O’Hara Senior, John Georgeson and others. However, Kevin Moran received many nominations for his work coaching in the East Region however the following words from a player sum up the nominations:

“Kev is a fantastic coach who is a very supportive both on and off court. He gives 100% to the east performance programme and has helped many juniors rise up the ranks in Scotland and even compete on a European stage for the first time. He commits both time and energy into everything and would be a well worthy winner of this award. He is always willing to give a word of advice or support and his eyes and cleverness for the game is unreal. He has helped the east region have a fantastic season showing in the annual inter regional championships winning 3 of the 5 disciplines. He is a fantastic role model as well performing on the highest stage of all and has a fantastic attitude to his own training as well which helps us as young players see what it takes to reach the highest level.”

Referee of the Year: Dave Ferguson

Referees are giving tirelessly to the sport and underpinning all that we do. It is difficult to select one referee above others  however, the players nominated Dave Ferguson due to his approach to refereeing, “not getting  involved too much and it is all about the players”. Dave was a popular award winner.

Club of the year was closely fought with nominations from Bridge of Allan (who seemed to bring the entire club to the evening – well done Walter), Newlands, Watsonians (with a significant increase in Junior players), Aberdeen Sports Village and others, however Inverness Squash Club were awarded Club of the year for 2015 / 16 and the following reasons were outlined in their nominations:

Team of the Year: Scottish Men’s Senior Team including our World Men’s Doubles Pair of Alan and Greg plus Rory, Chris, Doug and Kevin

Well done to all of our prize winners and we look forward to delivering another successful event next year.