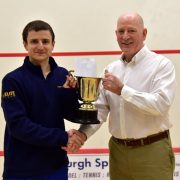 Inverness squash player Alan Clyne hopes to build on Sunday’s stunning victory at the Edinburgh Open when he takes part in this week’s Swedish Open. The 30-year-old Clyne rallied from a game down to beat Welshman Joel Makin 6-11, 11-8, 11-7, 11-7 at Edinburgh Sports Club in Sunday afternoon’s final to retain his Edinburgh Open crown.

Clyne, currently Scotland’s number one ranked player, jetted off to Sweden on Monday afternoon still revelling in his victory after a gruelling weekend of action.

He said: “I had a really tough set of matches from the quarter-finals onwards with my semi-final clash against number two seed Adrian Waller lasting 73 minutes on Saturday.

“Credit to Neil Gibson, my strength and conditioning coach, who got me in good shape to come out and perform well in the final.

“It’s great to retain the title. I was only seeded to make the semi-finals and although I was confident I could reach the final, I knew it was a tall order.

“The home crowd were a massive factor in my victory.”

Clyne, who teamed up with fellow Inverness squash ace Greg Lobban to claim the World Doubles Squash title in Australia last summer, is in the main draw for this week’s Swedish Open after his qualifying round opponent pulled out injured.

He takes on Columbian Miguel Angel Rodriguez in his first round clash on Thursday (February 2).

Clyne added: “I’ve had a few days to prepare for my match against Rodriguez.

“He’s a tough opponent about 20 places above me in the world rankings.

“I’m not putting too much pressure on myself but winning the Edinburgh Open gives me confidence and with the matches being televised on Eurosport this week, it’s a great platform to perform on.”

Scottish Junior National and Under 23 Squash Championships – coming to...
Scroll to top
This website uses cookies to improve your experience. We'll assume you're ok with this, but you can opt-out if you wish.Accept Reject Read More
Privacy & Cookies Policy
Necessary Always Enabled