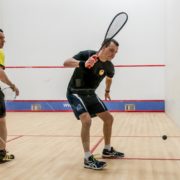 The competition kicks-off on Friday 18th May at 17:00 and spectating is free all weekend. The event booklet with the full schedule and be downloaded here.