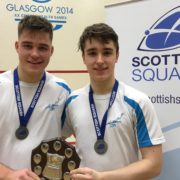 The Highlands pair recovered from one game down to take the title 10-11, 11-6, 11-6 which concluded the event in Glasgow.

Harry, 16, said: “Tino and Chris have done well at this event in previous years so we knew it was going to be a tough one.

“The final was a really tight match. We started off slowly and battled our way back into the match. 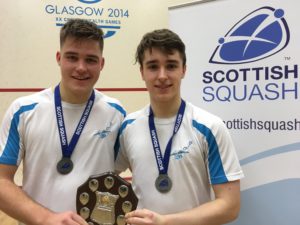 “During spells in the first game we didn’t quite sustain our tempo which is why we needed to change our tactics slightly.

“Playing with a good tempo and high intensity, taking the ball early proved vital in the end, something we have been working on during our Academy sessions.”

He added: “I played this event three years ago and wasn’t that great so it was good to get the win this time.

“Al is a great partner and an excellent player which has been shown during his success in both singles and doubles.” 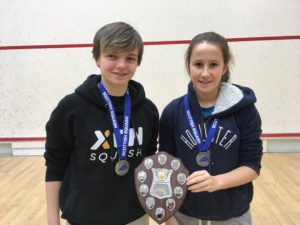 Their final match was a winner takes all encounter against Katie Gregson-MacLeod and Orla Young which was another incredibly tight three game contest which ended 9-11, 11-9. 11-9.

Maddie said: “The first game was okay but I probably shouldn’t have hit so many up the middle for Orla to play. We changed things in the second and third games and started hitting into the corner more which helped turn it around.

“I knew it was going to be close playing Orla and Katie so we are happy to win. I play doubles with Lucy at this event a lot and really enjoy it.

The Mixed Doubles event was won by Strathgryffe Junior players John Meehan and Beth Moglia who beat Lucy Murchie and Ben Orr in the final 11-8, 11-6. 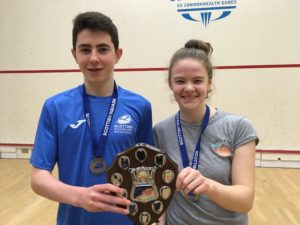 The winning pair had to battle from a game down in the semi-finals to reach the final, seeing off David Taylor and Faye Fulton 9-11, 11-2, 11-4.

Beth said: “Ben and Lucy were good and we knew we had to put up a good fight to beat them. We tried to keep the rallies long because they are good at hitting winners and we needed to prevent that as much as possible.

“John was great at keeping the rallies going and not making errors.

“I like playing doubles, it brings the community together and it’s something fun which everyone can play.”

For full details of results and final positions, click here